A downloadable visual novel for Windows, macOS, and Linux

In a seaside town, Hannah spends her days asleep and her nights wandering the empty beach. Too anxious to hold down a job or go to school, her roommate thinks she's hopeless. Hannah is inclined to agree.

On one of these monotonous nights, a spaceship crashes on the beach! The cute alien inside disrupts Hannah's life... and her entire sense of self.

I played this a while ago and just replayed it, this is such a sweet and charming game! I really like the art style and the writing is nice, i love it <3

It was wonderful <3 As an autistic man - who identifies younger than his physical age as a result - and someone quite heavily concerned with the LGBTQ+ community - and as someone who feels much like your protagonists here do at many points in my life - this resonated quite heavily with me.

The format of the kinetic novel, I believe, is highly underrated. Just sit back and let the story flow, right? It's great for just relaxing and taking in some really creative output.

Thank you for adding it to the Palestinian Aid Bundle of... almost a year ago, now. (Yes, I've had quite a backlog of games, on several platforms, that I've been getting to over irregular time periods.) I must, unfortunately, report the same installation issue that others have reported, of the itch.io Launcher not finding the correct package to install. Manual downloading/installation worked, however.

Take care! Hope you're having an amazing day. (This is my first comment on an itch.io submission - I'm quite happy that it was on yours!)

Hello!! I’m so glad to hear you enjoyed it and that Hannah resonated with you! :D

I agree about kinetic VNs–like I got into making visual novels because I love the branching narratives, but sometimes it’s really nice to just enjoy a linear story in this kind of format.

And hey, that bundle was HUGE! I’m not surprised that it took you awhile to pick up this particular game, though I’m glad you did :D

Also–thank you for flagging the installation issue. It had slipped my mind to address with the busy-ness of life BUT I am going to go look into that RIGHT NOW.

Thank you so much for the lovely comment :D It made my day to read this, I hope you’re having an amazing day too!

I noticed that using the itch.io launcher, the installation fails. I am able to download it via browser though!

Oh weird! I’ll take a look at that.

I’m glad you enjoyed it though! Thanks for playing :D

Thank you so much! I’m glad you enjoyed it :D

the corn in everything fact kinda blew my mind lmao

LMAO it IS quite a bizarre and mindblowing thing isn’t it? When I found out about it I was like what! What!! This can’t be real!! But it is… and it’s so weird I thought it would be a fun detail to include in this.

Thanks for playing :D I hope you enjoyed it, corn facts and all!

Thank you! I’m glad you enjoyed it :D

LOL yes it was Aishin's idea! I found it quite charming 😂

This was so heartwarming, personally i could relate to Hannah quite a bit, feeling like an alien on your own planet in some way, im glad to watch these two bond, completely different species, but be able to relate completely to each other, i loved this in everyway, great job and i hope to see much more of your fabulous work :)

Thank you so much for your kind words, and for the LP!! ;o; I'm so glad the story resonated with you!

Following a Yuri Empire recommendation of your VN, I just playread through it right now. There are some dark tones here and there, but the overall feel is still kinda sweet and fluffy. But still, be aware: That "Mental Health" tag isn't there just for show!

Art: Generally, the backgrounds are rather... spartan in their design. But that's not much of an issue for a shortie like this one. The character art on the other hand is *very* good, I just love looking at them. Very well drawn, and for a character-driven VN, that's important.

Audio: Nothing overly special, but the music does fit in well, setting up an atmosphere that I feel is in tune with the VN. So: Not bad.

Charas: The characters themselves are quite relatable for multiple reasons, although that might depend on the reader of course. For me at least, they were, even if I don't usually sleep every day away. ;) They're written well enough to draw you in, identify with and root for them, and that's what counts here, I'd say.

A direct message to the creators: Would've loved to see a CG of the cuddling part. ;)

Another one: I wanted to donate some money after completing the novel (because I think it's worth it), but sadly, it seems I can't. Or am I overlooking something on itch.io?

Edit: Also thank you for supporting Windows, macOS and Linux, specifically. I know Ren'Py makes this easy, but still!

Aaaa thank you so much for all the kind words!! I'm really glad you liked the characters too ;o;

A cuddling event image WOULD have been fun to have but unfortunately we made this game mostly in two weeks! So there wasn't time for more than the absolute necessary assets (which is also why it's written to avoid ever involving the inside of Hannah's house LOL).

As for supporting us, please donate to the artist's kofi! I'm not currently set up to take donations, but Aishin is: https://ko-fi.com/aishin

Anyway, thank you again for all the kind words and thoughtful feedback! I really appreciate it!

It's understandable given the time limit. :) I just used my imagination instead. ;)

Thanks for pointing me to Aishin's page on Ko-Fi, I left them a few cups as thanks for their work. :)

I really enjoined this visual novel! It was such a nice and good experience I had. The art work was amazing, and everything else.Keep it up!

Thank you so much for your kind comment! I'll be sure to pass it along to the artist :D

Thank you for playing!

I really enjoyed this! It's a nice heartwarming experience and I found the two characters to be very relatable and enjoyable. Although it's short I honestly haven't got an issue with that, it goes on for as long as it needs to and stays at the same level of quality throughout, this may have only been around a half hour but I'll remember this little gem for a while to come

Oh my gosh thank you so much for your comment! I'm so glad to hear you enjoyed it, this absolutely made my day!

No problem, I'm glad my comment cheered you up

This game has a spanish version?

I'm sorry, it's only in English right now! We can look into it if there's enough demand though! 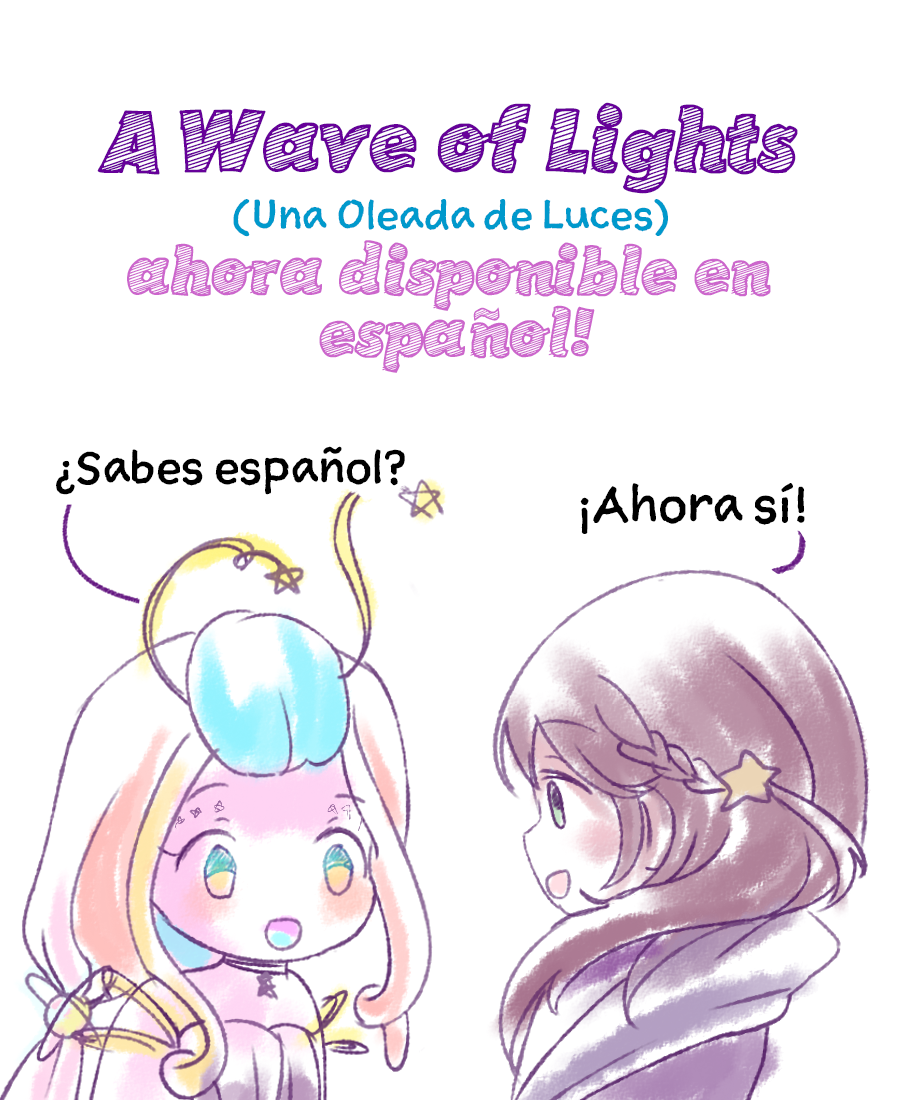 A lovely, casual visual novel through the eyes of Hannah, there's a lot here to admire by from the interactions between Hannah & Angie, the fantasy sci-fi themes to the wonderful artistic design that fits so well with a fantasy scenario. The story between the two projected with their weaknesses shared to one another, along with the art has made this little game a star in the night sky! Thank you! ^o^

Oh my goodness thank you so much for the sweet comment and the LP!! 🥰 I'm glad you enjoyed our game!

Decided to made a two part let's play but I think I almost reach the end of the game anyway....

There you go, all finished! That ending is so sweet.

Thank you so much for the LP! 🥰 I'm glad you enjoyed it!

A really nice relaxing visual novel I think the internal monologue of Hannah does a great job displaying anxiety and how it makes people feel. Definitely gives off a feel good vibe as two societal outcasts of their respective planets get to know more about each other and how they're viewed by their peoples. The game doesn't have any twists or especially exciting moments if that's what your looking for but the atmosphere and the story create a heartwarming experience. My full play through here:

Thank you so much for the playthrough video and the lovely comment!! ;o; I'm so glad to hear that you enjoyed it!

Thanks for making the game and responding I really appreciate it! as well! :D 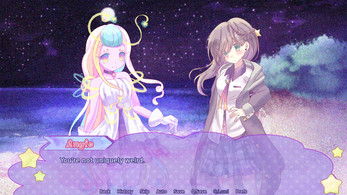 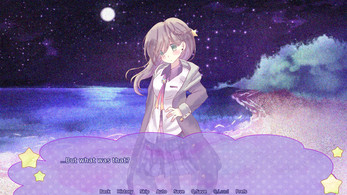 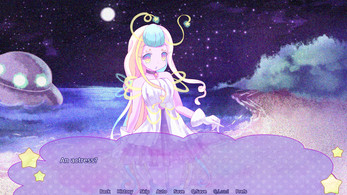